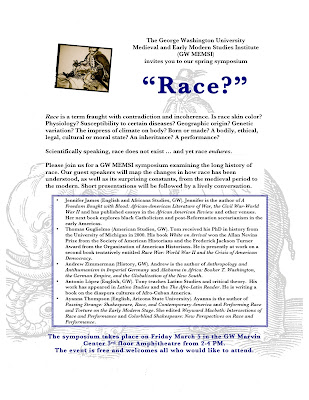 Race is a term fraught with contradiction and incoherence. Is race skin color? Physiology? Susceptibility to certain diseases? Geographic origin? Genetic variation? The impress of climate on body? Born or made? A bodily, ethical, legal, cultural or moral state? An inheritance? A performance?


Scientifically speaking, race does not exist … and yet race endures.


Please join us for a GW MEMSI symposium examining the long history of race. Our guest speakers will map the changes in how race has been understood, as well as its surprising constants, from the medieval period to the modern. Short presentations will be followed by a lively conversation.


The symposium takes place on Friday March 5 in the GW Marvin Center 3rd floor Amphitheatre from 2-4 PM.
The event is free and welcomes all who would like to attend.
Posted by Anonymous at Tuesday, February 23, 2010

I have to confess, I'm not seeing the Medieval and Early modern aspect of this symposium.