Nedda Mehdizadeh on Re-mapping the Renaissance 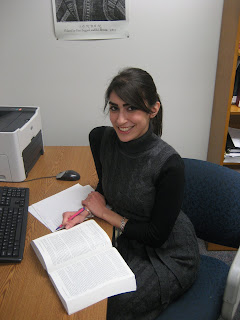 Two years ago the National Endowment for the Humanities altered the rules slightly for their prestigious summer seminars, enabling two advanced graduate students to attend each program along with the faculty members who form their main audience.

GW MEMSI is very proud of our two PhD students in English who have earned difficult to obtain spots in these seminars, Nedda Mehdizadeh and Jessica Frazier. I've asked them to each report on the seminars they have taken. Nedda's account follows below. But first let me state here how proud I am of her achievement: I've known Nedda since she enrolled at GW as a masters student, and have admired her rapid intellectual growth. In the letter of endorsement I composed for her application I observed:


What I love about Nedda's work is the reciprocal model of influence she employs: she is not interested in simply tracing how the West attempts to exert its power over an exoticized East, but looks attentively to how the East has already exerted a deep and compelling influence over the West. Focusing upon her keyword of translation, Nedda argues that these relations never break into binaries, but are instead complicated, interlaced, and ambivalent. She is a lucid writer and a diligent researcher with competence in the necessary languages. Whether she is examining patristic exegesis or early modern travel literature (and even Milton’s Paradise Lost as travel literature), she has an eye for compelling detail and a commitment to deep historical contextualization. Her work will someday yield an important book.

Congratulations Nedda and we look forward to your future successes!

--------
Last year, just as the parameters of my dissertation project were becoming clearer, I received an email notification about a summer seminar funded by the NEH and led by University of Maryland-College Park’s Center for Baroque and Renaissance Studies. This program, “Re-mapping the Renaissance: Exchange between Early Modern Islam and Europe,” described its aim as expanding notions of East/West encounter by re-thinking how those in Europe and those in the Middle East, Asia, and Africa interacted in the early modern period. Building on current trends in scholarship that work to re-imagine a binary opposition in which the West dominates the East, the seminar brought little known sources written and produced by the “East” to the fore. What we found was an East that informed processes of mapmaking, exemplified a mutual exchange of ideas, and inspired artistic trends in the production of fashion and artifacts.

Responsible for the wide-ranging program that was attentive to a variety of disciplines and cultures were the seminar’s two directors – Adele Seeff, director of CRBS and professor of English at UMD as well as Judith Tucker, professor of History at Georgetown University. The three-week schedule included cartography, travel narratives, and trade objects, and inspired a series of fascinating and productive conversations among the seminar’s 17 participants (15 professors/independent scholars and 2 graduate students). The disciplines represented spanned art history, architecture, comparative literature, English literature, history, and religious studies and research interests included matters concerning England, Spain, Portugal, Germany, North Africa, Georgia, Persia Turkey, to name a few.  During the three weeks of the program, we discussed assigned readings and attended presentations, and each conversation led us to long lists of references that accompanied the  new perspectives we were gaining. We also shared personal research developments we encountered during individual research time, giving us the space and opportunity to process information with our new colleagues and develop our projects in surprising ways. And the environment, no matter what the topic of discussion, was always congenial, warm, and helpful, as well as challenging.

The afterlife of the seminar has also been impressive, and this is a great credit to the wonderful organizers of the program. With the help of phone/email lists as well as our reliable !Ning site, we continue to collaborate and share as a community of scholars.

We have become friends and colleagues who read each other’s work, organize panels for conferences, or add to our growing list of resources with helpful recommendations. It is because of these accomplished scholars and wonderful people that I have been able to approach my project with a new perspective and renewed excitement. This seminar has reshaped the themes of my project, as I am reminded to be more attentive to the generative nature of encounter rather than focusing solely on the dangers so many have hitherto spoken of. It has taught me to consider the other side, inspiring me not only to include eastern-written documents in my upcoming Fall course, “When East Meets West,” but also design the course under the same guidelines of “Re-mapping the Renaissance.” And, perhaps, most importantly, it has provided me with a community of people I will always be grateful to know.