Jessica Frazier on "Shakespeare: From the Globe to the Global" 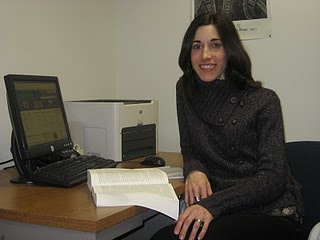 The GW Medieval and Early Modern Studies Institute is proud of our graduate student affiliates. They give us many good reasons to brag! Recently we highlighted Nedda Mehdizadeh's inclusion in an NEH seminar on Re-Mapping the Renaissance. Very few graduate students are admitted to each NEH seminar, and so we take it as a sign of Nedda's great promise that she was invited to enroll.


But she is not the only GW graduate student to have been offered a place in a seminar. This summer Jessica Frazier was accepted to participate in “Shakespeare: From the Globe to the Global” at the Folger Shakespeare Library. It was my pleasure to compose a letter of endorsement for Jessica in which I wrote:


Jessica has been auditing my course on “Objects, Agency, and the Constitution of Life.” I treasure her presence in the seminar: she brings to the readings, both in theory and in primary texts, an eye attentive to the complexities of narrative and material detail. Her queries to her fellow students in the class advance our discussion exponentially. She can always be counted upon to make cogent connections among disparate works and to keep bringing the conversation around to how goods (especially clothing and jewelry) circulate within international networks of trade and prestige. This class has been my favorite seminar in 16 years of teaching, thanks in no small part to Jessica’s contributions ... Jessica’s dissertation excavates the global narratives behind clothing and luxury items, especially as these objects materialize contemporary interchanges between west and east. Jessica is especially interested in Oriental costumes worn on stage and in public: how the sartorial speaks identity; how the hybridity of English body in Eastern dress functions socially (what it disrupts, what it enables); how costume adornments like diamonds speak stories that cross national boundaries and intermix the foreign with the domestic; how novelty of dress and of self performance might function in a world where the ambivalences of colonialism already had a long history; how aesthetics might be a cross-cultural phenomenon. Notably, Jessica is interested at looking at contact zones from both sides: not just how the orient arrives in England, but what travels from the west into the east. Her research is nuanced, interdisciplinary, and innovative. One day it will be published as an outstanding book.

Now wonder then, Jessica writes the following report of her summer at the Folger. Congratulations, Jessica, on your achievement!

As the spring semester came to a close, I received word that I would have the opportunity to participate in an NEH Institute entitled “Shakespeare: From the Globe to the Global.” A few months earlier, I had begun to outline the direction of my dissertation project: an exploration of fashionable early modern objects and their movement through transnational networks. Thus, I had been drawn to the questions that were to guide “Shakespeare: From the Globe to the Global.” How did the Shakespeare of the London Globe Theater become a global enterprise? And how did the global inform the productions of the Renaissance English Globe? As the Institute organizers wrote so eloquently in their “Dear Colleague” letter, “How did Shakespeare emerge from an early modern London that was increasingly aware of an expanding world to become a singular voice and an icon of empire and Englishness, the most significant representative of a globalized literary culture, and the most popular playwright of the non-Anglophone world?” This was a conversation in which I very much desired to take part, and a conversation that I sensed would open up novel avenues for the project on which I was embarking. As I discovered, I was not to be disappointed.

Hosted by the Folger Shakespeare Library and directed by Professor Michael Neill (Professor Emeritus at the University of Auckland), the Institute followed a rigorous five-week course of study, beginning with an inquiry into the perception of the global in Shakespeare’s England and ending with an examination of Shakespeare as both a tool of British colonialism and as a mechanism to speak back to an imperial system. Each week brought leading scholars in the fields of English, history, and film and media studies to serve as guest facilitators. The early weeks of the Institute dealt directly with my area of study, and I acquired new perspectives on mercantile encounter in the period. As the weeks progressed, “Shakespeare: From the Globe to the Global” led me into less familiar, but equally valued, terrain, as I learned of contemporary, international cinematic productions of Shakespearean plays. During this latter portion of our study, Professor Neill challenged us to consider what makes these adaptations “Shakespearean”? This question now informs a film assignment on my syllabus this semester for “Introduction to English Literature.”

As one of three graduate students in the group, I was perhaps not entirely prepared for the kindness and spirit of camaraderie with which I was met by the other participants, many of whom are experienced professors. From them, I garnered encouragement and advice about both the dissertating process and academic life post-graduate school. But perhaps most importantly, they provided me with much insight about being a teacher. Teaching strategies, discussion techniques, and graded assignments that I am currently incorporating into my classroom bear their mark and influence. I know that the professor that I am becoming is and will hopefully continue to be inflected by my fellow participants’ gracious commitment not only to scholarship but also to their students. Professor Neill, the staff of the Folger, the Institute participants, the guest scholars—all of these components contributed to a summer that has helped to shape the path of my scholarship and the course of my profession. I am so grateful for it.