Playing with Time: Pancakes and Bells in "The Shoemaker's Holiday" 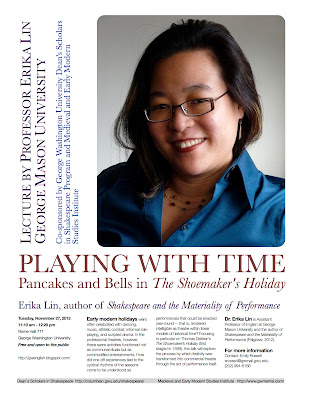 Lin is an Assistant Professor of English at George Mason University; she is the author of Shakespeare and the Materiality of Performance (Palgrave, 2012). It's sure to be a fantastic event!

Playing with Time: Pancakes and Bells in The Shoemaker's Holiday

Early modern holidays were often celebrated with dancing, music, athletic combat, informal role-playing, and scripted drama. In the professional theatres, however, these same activities functioned not as communal rituals but as commodified entertainments. How did one-off experiences tied to the cyclical rhythms of the seasons come to be understood as performances that could be enacted year-round -- that is, rendered intelligible as theatre within linear models of historical time? Focusing in particular on Thomas Dekker's The Shoemaker’s Holiday (first staged in 1599), this talk will explore the process by which festivity was transformed into commercial theatre through the act of performance itself.