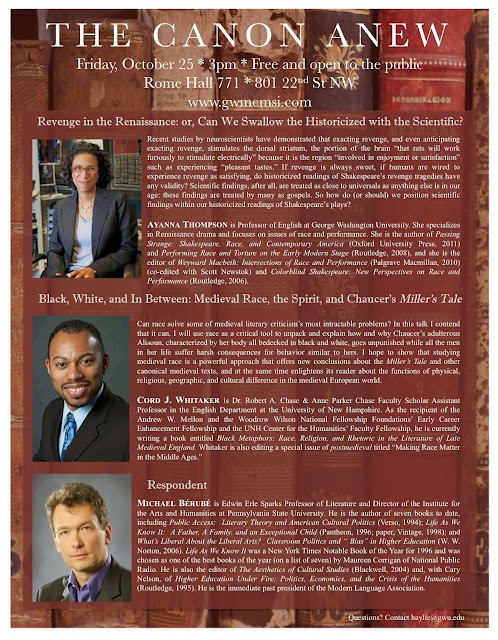 "The Canon Anew" is an event featuring GW English's own Ayanna Thompson and Cord Whitaker of the University of New Hampshire.  Michael Bérubé will begin his residency with the GW English Department by responding to their presentations. More about Michael Bérubé's residency can be found here.

The canon wars were resolved in part by incorporating more authors and works within what is taught in literature departments as well as expanding the focus of journals and book series (and inventing many new forums). Surprisingly, however, two long revered figures continue to loom over "post-canonical" English literature, Geoffrey Chaucer and William Shakespeare. Both have professional societies, journals, and a significant publishing industry behind them. Both have become something of an anomaly in progressive English departments: single author courses in an age that has mainly given up on narratives of Great Men and singular genius. This forum asks in what new ways we can approach über-canonical literature and authors, acknowledging the problems of such traditional and intense focus as well as the investigating the opportunities such endeavors yield.

Revenge in the Renaissance: or, Can We Swallow the Historicized with the Scientific? 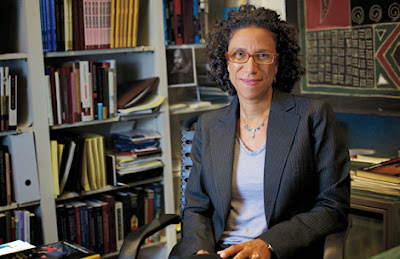 Recent studies by neuroscientists have demonstrated that exacting revenge, and even anticipating exacting revenge, stimulates the dorsal striatum, the portion of the brain “that rats will work furiously to stimulate electrically” because it is the region “involved in enjoyment or satisfaction” such as experiencing “pleasant tastes.” If revenge is always sweet, if humans are wired to experience revenge as satisfying, do historicized readings of Shakespeare’s revenge tragedies have any validity? Scientific findings, after all, are treated as close to universals as anything else is in our age: these findings are treated by many as gospels. So how do (or should) we position scientific findings within our historicized readings of Shakespeare’s plays?

Ayanna Thompson is Professor of English at George Washington University. She specializes in Renaissance drama and focuses on issues of race and performance. She is the author of Passing Strange: Shakespeare, Race, and Contemporary America (Oxford University Press, 2011) and Performing Race and Torture on the Early Modern Stage (Routledge, 2008), and she is the editor of Weyward Macbeth: Intersections of Race and Performance (Palgrave Macmillan, 2010) (co-edited with Scott Newstok) and Colorblind Shakespeare: New Perspectives on Race and Performance (Routledge, 2006). Professor Thompson is a Trustee of the Shakespeare Association of America.

Black, White, and In Between: Medieval Race, the Spirit, and Chaucer’s Miller’s Tale 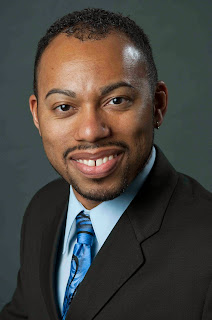 Can race solve some of medieval literary criticism’s most intractable problems? In this talk I contend that it can. I will use race as a critical tool to unpack and explain how and why Chaucer’s adulterous Alisoun, characterized by her body all bedecked in black and white, goes unpunished while all the men in her life suffer harsh consequences for behavior similar to hers. I hope to show that studying medieval race is a powerful approach that offers new conclusions about the Miller’s Tale and other canonical medieval texts, and at the same time enlightens its reader about the functions of physical, religious, geographic, and cultural difference in the medieval European world.


Cord J. Whitaker is Dr. Robert A. Chase & Anne Parker Chase Faculty Scholar Assistant Professor in the English Department at the University of New Hampshire. As the recipient of the Andrew W. Mellon and the Woodrow Wilson National Fellowship Foundations’ Early Career Enhancement Fellowship and the UNH Center for the Humanities’ Faculty Fellowship, he is currently writing a book entitled Black Metaphors: Race, Religion, and Rhetoric in the Literature of Late Medieval England. Whitaker is also editing a special issue of postmedieval titled “Making Race Matter in the Middle Ages.” 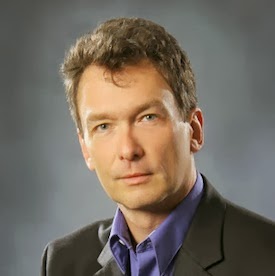 Michael Bérubé is Edwin Erle Sparks Professor of Literature and Director of the Institute for the Arts and Humanities at Pennsylvania State University. He is the author of seven books to date, including Public Access:  Literary Theory and American Cultural Politics (Verso, 1994); Life As We Know It:  A Father, A Family, and an Exceptional Child (Pantheon, 1996; paper, Vintage, 1998); and What’s Liberal About the Liberal Arts?  Classroom Politics and “ Bias” in Higher Education (W. W. Norton, 2006). Life As We Know It was a New York Times Notable Book of the Year for 1996 and was chosen as one of the best books of the year (on a list of seven) by Maureen Corrigan of National Public Radio. He is also the editor of The Aesthetics of Cultural Studies (Blackwell, 2004) and, with Cary Nelson, of Higher Education Under Fire: Politics, Economics, and the Crisis of the Humanities (Routledge, 1995). He is the immediate past president of the Modern Language Association.

Donwload the poster for the event here
Posted by haylie at Tuesday, October 08, 2013