From History to Science in the Early Modern Atlantic

Please join us Tuesday, April 29th for a one-day symposium: From History to Science in the Early Modern Atlantic. The symposium will explore the role of indigenous people, ethnographers, and naturalists in the Spanish Atlantic in the development of early modern science.  We will have a keynote by Jorge Cañizares Esguerra, two plenaries by José Pardo Tomás and Carlos Viesca Treviño and presentations by María Portuondo, Marcy Norton, Ralph Bauer and Jaime Marroquín Arredondo. Please see the flyer with a tentative schedule.

Light breakfast, lunch and 'Mexican tapas' in the closing reception will be provided. Although this event is free and open to the public, we need accurate numbers and therefore ask you to RSVP here.

9:45 AM
Lecture
A New World of Secrets: Curiosity and Natural History in the Sixteenth-Century Atlantic World
Ralph Bauer
University of Maryland

Dr. Bauer's talk will continue the ongoing critical reevaluation of sixteenth-century Spanish natural histories about the New World and its role in the history of science by focusing on the works of the royal chronicler Gonzalo Fernández de Oviedo y Valdés (1478–1557). His talk focuses specifically on the ideological legitimation of Christian curiosity in Oviedo’s works by synthesizing the Classical pagan tradition of natural history—especially as derived from Pliny—with the rhetorical tradition of the Christian martyr. This last tradition was inherited from thirteenth-century neo-Aristotelian (pseudo-) alchemists such as Arnald of Villanova and Raymond Lull. Oviedo's works form a crucial intellectual bridge between the thirteenth-century Aristotelian “scientific revolution” and the “scientific revolution” of the seventeenth century, translated into the English context by English alchemists such as Richard Eden and informing the natural histories written by such prominent English natural historians as Hans Sloane, president of the Royal Society of London.

In recent years, Hernández's work seems to have finally caught the attention of the historiography that has elaborated a story of the history of science which strives to avoid a Eurocentric perspective. Nonetheless, it is our belief that much remains to be said on the long and unfinished Hernandian project to compile a Historia natural de la Nueva España. This presentation will explore three main issues in the Historia natural de la Nueva España: A) The empirical and scientific discourse and practices implemented by Hernandez and his collaborators during his stay in Mexico (1571-1577); B) American Indians' agency in the development of the work. C) The scope (and limits) of the Renaissance humanism influence in the intellectual conceptualization of a new, empirically-based historiography which characterizes Hernández's Historia natural de la Nueva España.

Despite the recent surge of interest in Iberian and colonial science, this paper will argue that we have still not sufficiently appreciated the degree to which early modern science was indebted to mestizaje and Amerindian cultural formations and actors. Dr. Norton's case study will investigate these themes through a close analysis of The Ornithology of Francis Willughby (London, 1678), a canonical text in the history of the biological sciences.  Moreover, she will argue that affective relationships between humans and animals were central to early modern natural history, as well as later zoology.

After the Spanish Conquest, Native physicians subsisted under a diversity of conditions. Some of them worked inside their indigenous communities, but some were incorporated in different ways to the new social structures. In Franciscan convents and in Vasco de Quiroga's foundations in Michoacán, they were recognized as health care professionals, and considered as the most convenient people to take care of indigenous patients, because of their knowledge of their nature. The medical activity and its subjacent knowledge were thus an important factor to health attention. In this lecture, Dr. Viesca will present some data about this indigenous physicians, their professional activity and their medical knowledge, with special emphasis on the processes of appropriation of elements from Spanish medicine, the change of significance of some of their diagnosis and therapeutic criteria, the medicinal products interchange between both cultural realms and the presence of that knowledge in texts like the De la Cruz-Badianus Codex, the Florentine Codex and Francisco Hernández's Natural History.

Recent history of science has established that the European study of early American geography, nature and culture helped transform the Western conception of reality. However, the method for obtaining, verifying and experiencing early American knowledge has not been studied in detail. This talk will analyze the evolution of the Spanish ethnographic method of studying, conceptualizing and describing early Americas' knowledge and its development from new empirical practices, contemporary judiciary practices, and particularly from Renaissance humanism's grammatology. Dr. Marroquín will outline key conceptual moments in the evolution of the Spanish American ethnographic-naturalist method in the works of Gonzalo Fernández de Oviedo, Sebastián Ramírez de Fuenleal, Andrés de Olmos, Bernardino de Sahagún, and Francisco Hernández. He argues that these cross-cultural ethnographic histories developed in practice key components of the later Baconian new science.

3:30 PM
Lecture
Like Pieces of a Vast Puzzle: Describing the New World to the Old
Maria Portuondo
Johns Hopkins University

The discovery and colonization of the American continent presented Europe with an avalanche of new knowledge about natural world which like scattered pieces of a huge puzzle had to be assembled into a cohesive image. This enterprise would test those in charge of assembling the puzzle—from ship pilots, to geographers, to agents of the state—who in Spain and the Indies alike, transformed the ways in which knowledge was created and compiled. Throughout the presentation we will see how Spanish cosmographers collected geographical information about the vast territory, how indigenous groups sought to have their perspectives represented and how old patters of thought fell away giving way to the empiricist approach that characterizes the modern scientific enterprise.

4:15 PM
Keynote Lecture
The Changing Contexts of Knowledge: Jesuit Mission Science, from the 16th to the 18th Centuries
Jorge Cañizares Esguerra
The University of Texas at Austin

In this talk Dr. Cañizares-Esguerra follows three different examples of Jesuit mission science: one in the sixteenth and seventeenth centuries characterized by the empirical collection of data to effectively save souls; another in the mid eighteenth century characterized by global geopolitical calculation and trans-imperial rivalries in the Pacific; and a third in the late eighteenth century, characterized by the micro empirical description, to battle innuendo and state marginalization. This lecture will highlight the importance of context for understanding the history of science in the early modern Iberian empires (and everywhere else for that matter). 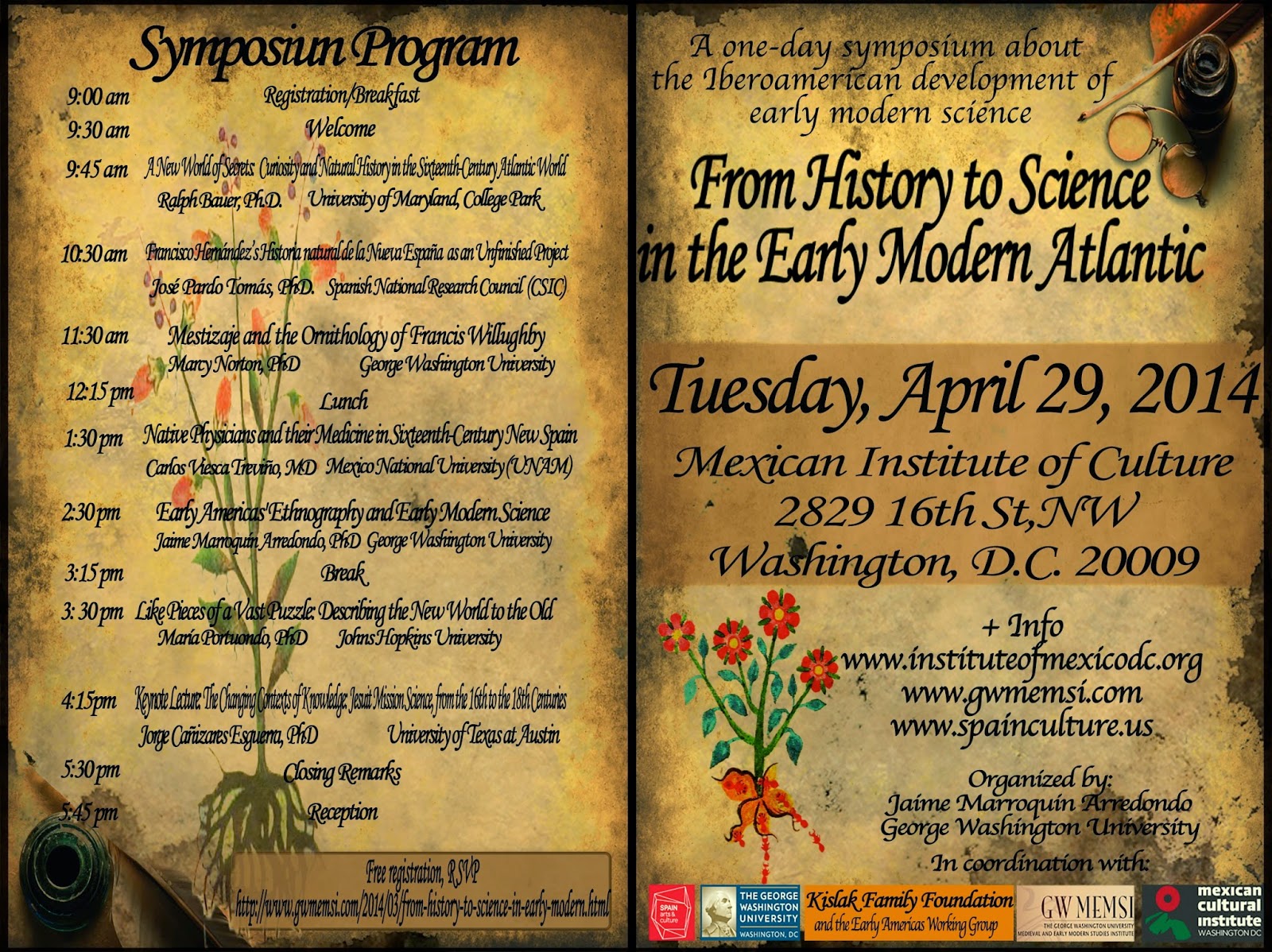 (A PDF of this flyer is available for download here)
Posted by haylie at Monday, April 14, 2014 No comments: Links to this post

We look forward to seeing you at this exciting event sponsored by GW's Department of History.

Dr. Syros' research interests focus on the interaction among the Christian, Islamic, and Jewish traditions of political thought as well as on cross-cultural encounters in the early modern period. 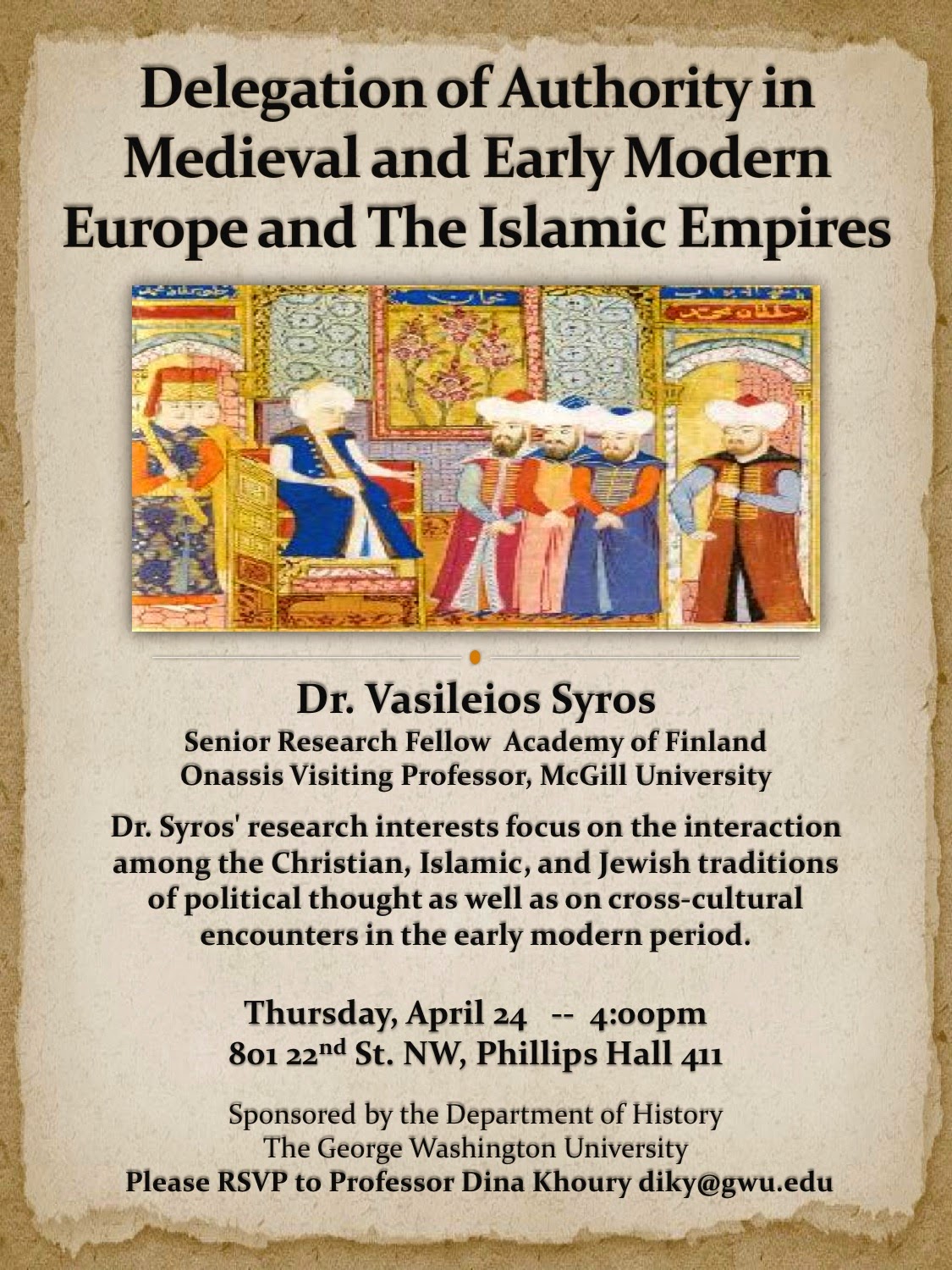 Posted by haylie at Friday, April 04, 2014 No comments: Links to this post

Please join us for Derrick Higginbotham's upcoming paper at GW.

Derrick Higginbotham is a Lecturer in the Department of English at the University of Cape Town, South Africa as well as a co-director of the graduate program. He publishes chiefly on late medieval and early modern theatre, including a recent article on the representation of rape in Cardenio.  Currently, he is finishing a book entitled Commercial Passions: Economic Practice and Self-Control on Late Medieval and Early Modern English Stages, which examines dramatic depictions of economic activity from the fifteenth to early seventeenth centuries. His research interests include literary history, the ‘new’ economic criticism, as well as gender and sexuality studies.  This paper on early modern stage depictions of consumption comes from his book in progress.
Posted by haylie at Friday, April 04, 2014 No comments: Links to this post