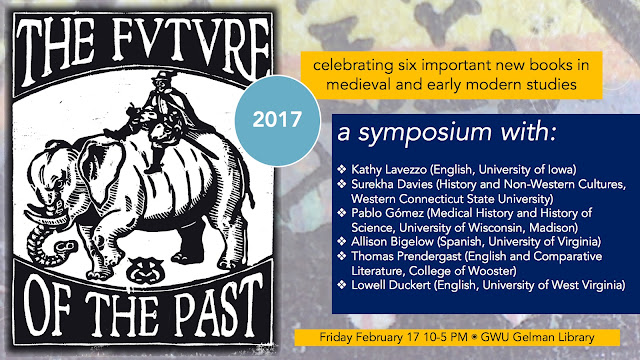 Please mark your calendar for the biggest GW MEMSI event of the spring, our annual symposium on important new books (some in progress, some just published) in medieval and early modern studies. This interdisciplinary conversation welcomes everyone who would like to attend. Please join us on Friday February 17 from 10-5 PM.

If you are attending, would you please register here?

The symposium will be held in the beautiful International Brotherhood of Teamsters Room of GWU's Gelman Library (room 702). You will be asked to show an ID to enter the library but the event is open to the public. A short description of each presentation may be found at the bottom of this post.

1-2.30
Map and Home
Kathy Lavezzo
Associate Professor of English, University of Iowa
“Wandering Christians” and Accommodated Jews: Domesticity, “the Jew,” and the Future of Early Modern England
Surekha Davies
Department of History and Non-Western Cultures, Western Connecticut State University
Why won’t we look images properly?  The Visual History of Monsters and its Discontents

Allison Bigelow
Cultural Touchstones: Mining, Refining, and the Languages of Empire in the Early Americas
Scholars of mining in colonial Latin America – the standard of early modern global trade, and the heart of the Black Legend – confront a central methodological tension in our attempt to read the remains of the past. Archival records indicate that indigenous miners composed the majority of the workforce in the silver industry, but without sources written in Quechua, Aymara, and Nahuatl, we struggle to recover their intellectual influences. By tracing Hispanized forms of Quechua and Aymara in colonial letters and their mistranslation into English, French, and German, my book converts the hybrid language of colonial science into an archive that reveals indigenous contributions to new technologies. This method also reveals how colonial mistranslations of Andean knowledge brought coherence to categories of “castas de metales” that included “cimarrones,” “pacos,” “mulatos,” and “negrillos” (García de Llanos 1609: 86-90; Barba 1640: 39v-41v). Underground, miners classified metals by depth, using color and location to understand elemental mixtures. Between top-level silver chlorides (“pacos”) and deep-level silver sulfides (“negrillos”), an intermediary group behaved like either group. Colonial miners translated the Andean concept of “intermediary” (“chaupi mitta”) into their own term for “in the middle” – “mulato,” which European translators interpreted differently. Montagu (1670: 9) and Lange (1676: 135) describe “Mulatos” as “a colour” (“ist eine Farbe”) that was between “pacos” and “negrillos,” and they translate Barba’s humoral concept of a splenetic hue (“de color baço”) into “a Brown colour” (“ist einer braunen Farbe”). Hautin de Villars (1730) and Lenglet du Fresnoy (1750) do not assign a color. Cultural Touchstones thus recovers the technical literacies of indigenous miners, reveals new insights in the study of race, color, and colonial science, and shows how translators conveyed different ideas about naming and classification.


Why won’t we look images properly? The Visual History of Monsters and its Discontents

Despite abundant work in monster studies, early modern images of monstrous peoples and animals at the edges of the earth are usually dismissed by historians of cartography as imaginative misapprehensions. Scholars continue to attach loaded terms such as ‘legendary’, without justification, to images of humans and animals on maps, as if this constitutes explanation and a reason to halt further analysis. They measure iconographic accuracy in relation to an unarticulated set of conventions, rarely applying the numerous historiographical tools developed in the past half-century in the histories of art, science, mentalities, literary studies or cultural studies. At best, monsters and other unparseable features are perceived by mainstream history of cartography as appendages to the study of more “central” historical questions about maps and politics, or cartographic accuracy. This paper contends that the notion of the imaginary nature of these representations, which exoticizes pre-modern mentalities, does cultural work for us moderns: it constructs the identity of modernity through a particular notion of ‘objective’ science and is in fact a myth that one might call temporal Orientalism.


For All Waters: Finding Ourselves in Early Modern Wetscapes


“I am for all waters,” says the clown Feste in William Shakespeare’s play Twelfth Night (1601). Figuratively, he is simply claiming to be up for anything. But what if the preposition for signals a material interaction with water and not just an elemental metaphor about it? This presentation will ask the following fluid questions: what might it mean to be a watery “I” (“I am for all waters”)? How might water help us not just move beyond the human but redefine it as well? Can an inorganic substance like water have a life, and if so, how can its liveliness challenge our epistemological frameworks for authorship, voice, and the living? Can water lead us to alternate futures for both humans and nonhumans in our era of climate change – a period of water wars, droughts, and floods? How can examining the laminar as well as vortical currents of early modern wetscapes help us inhabit our world always caught within catastrophe?


The Experiential Caribbean: Creating Knowledge and Healing in the Early Modern Atlantic
Seventeenth century Caribeños lived at a time when the contents of the world, and how people thought it could be known, were being re-imagined. In this presentation, I will discuss some of the main themes I explore in my forthcoming book. In particular, I will examine the development throughout this period of novel strategies that black Caribbean ritual specialists used to exercise power over the natural world—strategies that included a compound of spiritual, analytical, experiential, descriptive and classificatory practices. These revolutionary creative strategies were highly successful and made black ritual practitioners the intellectual leaders of a region saturated with ideas from all over the globe. Black Caribbean ritual practitioner’s power-creating strategies were grounded on innovative experiential phenomena that they manufactured on the basis of localized circumstances in different Caribbean locales. In my talk, I will emphasize how the physical, social, and spiritual, as well as the natural and moral orders, manifested themselves in physically evident experiences through sensorial landscapes that black Caribbean practitioners helped construct. The new experiential Caribbean allowed Black Caribbean ritual practitioners to claim access to ultimate truths about the nature of the world and allege morally superior knowledge in communities composed of ragtag groups of Atlantic people coming from a diverse number of cultural backgrounds.

Kathy Lavezzo
“Wandering Christians” and Accommodated Jews: Domesticity, “the Jew,” and the Future of Early Modern England
1640 witnessed the publication of an anonymous—and brilliantly satirical—chapbook, The Wandering Jew Telling Fortunes to Englishmen. The title of the pamphlet suggests its interest in the Wandering Jew, a stereotype that had currency in England since the turn of the century. But in fact, the booklet concerns the journeying of a motley group of dissolute and notably greedy Londoners to the cozy abode of a homey Jew. Located on the outskirts of the city, the Jew’s home draws Christians who seek to learn their futures. My presentation takes this chapbook as a heuristic for major issues covered in my book, The Accommodated Jew: Antisemitism from Bede to Milton. The chapbook makes explicit a trend that, I argue, forms a major component of the long history of medieval and Early Modern English antisemitic writing: a tendency of the English to imagine accommodated Jews (that is, Jews in houses) in order to accommodate themselves to an emerging urban, bourgeois and profit-driven society. Understood broadly, this presentation speaks to ongoing debates about the way imaginative writing responds to historical problems, the supposed alterity of medieval to Early Modern culture, and “the Jew” as a charged object of cross-identification.


Ben Jonson’s Head
In many ways Ben Jonson might be called the foster-father of Poets’ Corner. For though his famous elegy to Shakespeare from the First Folio appears to resist the idea that poets should be buried together in the South Transept (especially Shakespeare), it was his resistance to this idea that actually codified a transcendent poetic space within the Abbey. This place provided a means by which the nation could recollect the cultural genealogy of England and thus conceive of the Abbey as the “hearth of our commonwealth and national religion.” Yet this heimisch national space was troubled by the scandalous nineteenth-century stories of Jonson’s own burial and partial disinterment. What became clear was that the quiet hierarchies that supposedly governed cultural production, and were meant to provide a beautiful model for the polis, were about to be challenged by a public more invested in new media, marketing and the idea of literary celebrity.