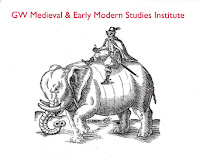 Please mark your calendar now for a symposium and a celebration as the GW Medieval and Early Modern Studies Institute (GW MEMSI) celebrates ten years of community-making and capacious welcome.

Monday October 16
The Future of the Past:

This symposium brings together six medievalists and early modernists for a wide ranging conversation about institutional and canon transformation, especially in in a time of intolerance; the challenge past materials pose to current racial fantasies and formations; the inhibiting factors that the unthought whiteness of the fields present; how to forge a way forward to more inclusive memberships, institutions, shared endeavors. Our hope is to sustain and intensify the energy of two recent conference sessions, "The Color of Membership" at the Shakespeare Association of America and "Whiteness in Medieval Studies" at the International Congress on Medieval Studies in Kalamazoo. This symposium is open to everyone who would like to attend and features:

Cord Whitaker, Wellesley College (and blogger at In the Middle)
Mirage's Shimmer and the End of the White Middle Ages
Cord J. Whitaker teaches medieval literature and the history of race at Wellesley. His articles on medieval romance, religious conflict, and race have appeared in journals such as the JEGP and the Yearbook of Langland Studies. He is the editor of “Making Race Matter in the Middle Ages,” an acclaimed issue of postmedieval. Whitaker is currently completing a book project on race and rhetoric in late medieval English literature and beginning another on Harlem Renaissance medievalism. He blogs at whatisracialdifference.com, the Albright Institute’s The Spoke, and In the Middle.

Sierra Lomuto, University of Pennsylvania
Medievalist Otherness: The Stakes of the "Global" in Medieval Studies
Sierra Lomuto is a PhD Candidate in English at the University of Pennsylvania. She is currently finishing her dissertation, Exotic Allies: Mongol Alterity in the Global Middle Ages, which traces the racial construction of Mongols within thirteenth- and fourteenth-century Latin Christian and Middle English texts, and its influence on early English colonialism. Her new research project will examine how contemporary humanitarian projects have engaged with the medieval past, particularly Chaucer, through which she hopes to reveal a counterpoint to the violent misappropriations within white supremacist movements. She co-organized the Whiteness in Medieval Studies workshop at ICMS last May and is an active member of the Medievalists of Color group.

Kim F. Hall, Barnard College
Invisible Blackness: What Does our Intersectionality Look Like?
Kim F. Hall is the Lucyle Hook Chair of English and a Professor of Africana Studies at Barnard College where she teaches courses in Early Modern/ Renaissance Literature, Black Feminist Studies, Critical Race Theory and Food Studies. She is the author of Things of Darkness: Economies of Race and Gender in Early Modern England, Othello: Texts and Contexts and The Sweet Taste of Empire: Sugar, Gender and Material Culture in Seventeenth Century England (in production with UPENN Press. Professor Hall was the Barnard Library’s inaugural “Faculty Partner of the Year (2014) and 2015 winner of the College’s Tow Award for Innovative Pedagogy for the Digital Shange Project. In 2016, Diverse Issues in Higher Education named her one of “25 Women Making a Difference in Higher Education and Beyond.” She is currently working on the book project, 'Othello Was My Grandfather': Shakespeare and Race in the African Diaspora, for which she has received grants from the NEH, the National Humanities Center and the Schomburg Center for Research in African-American Culture.

Erika T. Lin, CUNY Graduate Center
Institutional Structures and Cultural Change: Race, Affect, Community, and Performance
Erika T. Lin is an Associate Professor in the Ph.D. Program in Theatre and Performance at the Graduate Center, CUNY. She is the author of Shakespeare and the Materiality of Performance, which won the 2013 David Bevington Award for Best New Book in Early Drama Studies. She is currently writing a book on seasonal festivities and early modern commercial theatre, a project supported by a 2014-15 Andrew W. Mellon Long-Term Fellowship at the Folger Shakespeare Library. She serves on the Board of Trustees of the Shakespeare Association of America and is the Program Committee Chair for the SAA's 2019 meeting in Washington, DC.

Wan-Chuan Kao, Washington and Lee University
The Path of Totality: Precarity, Territoriality, and the Vitality Contour of Whiteness

Wan-Chuan Kao is Assistant Professor of English at Washington and Lee University. His research interests include Chaucer, gender and sexuality, affect, and whiteness studies. His articles have appeared in Studies in the Age of Chaucer, postmedieval, and Journal of Lesbian Studies. Wan-Chuan is currently working on a monograph titled White before Whiteness that examines late medieval representations of whiteness across somatic and non-somatic figurations.


Arthur L. Little, UCLA
Marginalia, In-citation, and the Theoretical Critical Future of Early Modern Race
Arthur L. Little, Jr. is Associate Professor of English at University of California, Los Angeles.  He is the author of Shakespeare Jungle Fever:  National Imperial Re-Visions of Race, Rape, and Sacrifice (Stanford) and Shakespeare and Race Theory (Bloomsbury Arden Shakespeare, forthcoming); he is also the editor of White People in Shakespeare (in progress).  Of relevant interest here, he recently published an essay on “Re-Historiczing White Melancholia” (Shakespeare Quarterly, 2016), and recently organized and presented on a Shakespeare Association of America plenary, “The Color of Membership” (2017).

Friday and Saturday, March 2 & 3
Touching the Past (Again)
This event celebrates ten years of the flourishing of GW MEMSI by rethinking and revisiting our very first event, the Inaugural Symposium called Touching the Past. Though in profound ways 2008 seems like a different world at this vantage, the Institute remains steadfast in its foundational belief that possible futures are to be found in encountering the past anew. With an emphasis on advent, adventure, and touch widely construed (physical, emotional, cross-species, intertemporal) the symposium hopes to engender some lively conversation that looks forward and back at once. The event includes some of the original presenters as well as many new voices: 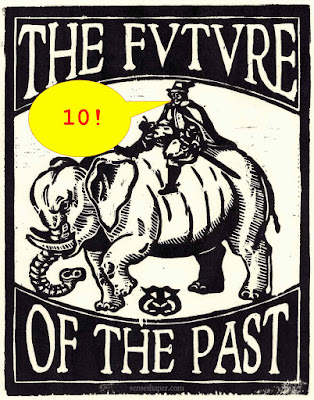 Posted by Jeffrey Cohen at Monday, June 12, 2017 No comments: Links to this post