Touching the Past (Again)

Help us to celebrates TEN years of the flourishing of GW MEMSI by rethinking and revisiting our very first event, the Inaugural Symposium called Touching the Past. Though in profound ways 2008 seems like a different world at this vantage, the Institute remains steadfast in its foundational belief that possible futures are to be found in encountering the past anew. With an emphasis on advent, adventure, and touch widely construed (physical, emotional, cross-species, intertemporal) the symposium hopes to engender some lively conversation that looks forward and back at once. The event includes some of the original presenters as well as many new voices. All are welcome. Mark your calendar now!


Carolyn Dinshaw, New York University
Doing Medieval Sex Work in the 21st Century:
John/Eleanor Rykener and the Last of the Cockettes
In this talk I will re-visit the 1395 document that records the deposition of John Rykener, aka Eleanor, a paid sex worker caught in the act in London. I am especially interested in its afterlives in recent novels and performances. I will focus on the "dance attraction" put on in New York in 2015 by Rumi Missabu, one of the last surviving members of the legendary genderfuck performance troupe the Cockettes.

Peggy McCracken, University of Michigan
Cold Stone, Warm Flesh: Pygmalion’s Touch
Moving among accounts of Pygmalion in the Roman de la rose, the Roman de la rose moralisé, and the Ovide moralisé, this paper puts metamorphosis, creation, and materiality into relation. Inspired by recent research on stone (Cohen!) and by work in new materialisms, I focus on the vivifying effect of affect, refracted in medieval Pygmalion narratives through translation, historicization, and moralization. I argue for metamorphosis as a conceptual category through which to view material transformation and the potential vitality—and even subjectivity—of objects, but also as a category that—in its medieval versions—calls for ethical engagement.

Julian Yates, University of Delaware
Sting
To touch. Ouch! That hurt. Let’s try it again. Touch again. Retouch. Hmm. Strange energy this. Not sure where it’s coming from. Might all just be a repetition compulsion or it might be a game of fort / da. It might prove to be something else entirely. I mean why is it that I keep returning to the same sentences by Shakespeare? Sentences that pass as something we call a character—a character stung by the past, stung in the way that a bee stings—though I hear no telltale buzz, just a voice asking “Is not this a lamentable thing?”

Steve Mentz, St John's University (and the Bookfish)
How to Act Human in the Anthropocene
This now is out of joint. That’s what Anthropocene means: not that humans control the world, but that we have tangled our contacts with personal and geological time. Living in Anthropocene disorder requires inventing new ways to act human while being posthuman. Guidance comes from the real and imagined past, from Hamlet’s acting lessons to global pirate utopias to the salt-water Maelstrom off Norway. This lesson structures itself with three verbs: act, embark, swim.

Anthony Bale, Birkbeck University of London
Being Margery Kempe
In this paper I will consider what is at stake in our potential identifications with Margery Kempe and how this relates to my recent work on Kempe and her Book. The paper will draw on Dinshaw's work on Kempe in her Getting Medieval, and relate this to my experience of working on a translation and edition of Kempe's Book (Oxford University Press, 2016), my research into Kempe's pilgrimages, and subsequent work on Kempe's scribe, Richard Salthouse. I will then consider the possibilities and limitations of embodied research in terms of working on a figure such as Kempe.

Stephanie Trigg, University of Melbourne
Sense of Touch: Absolutely Similar
This paper will attempt to work through the complex rituals of touch involved in handling medievalist objects, with particular reference to the manuscript facsimile. In their intricate and artificial materiality, facsimiles combine the modern technological sophistication of accurate reproduction with the sensory, affective appeal of the medieval. Facsimiles are simulations: hybrid objects that blur the distinction between past and present, between the medieval and the medievalist, and between the professional and the amateur reader. This paper will explore some of the distinctive rituals and decorums that have developed around the way we handle these medievalist books.

Dorothy Kim, Vassar College
The Jew, The Ethiopian, and St. Margaret
In the Early Middle English St. Margaret, Margaret is marked as a heathen by her blackened skin. This text changes the standard version of St. Margaret’s life by converting the dragon she fights into a Jew and making Margaret herself black, correlating with the other visitor to her jail cell—the blaoman, or Ethiopian. This talk works through theories of appropriation and conversion and the logics that allow this vita to practice complete bodily/religious/racial conversion, even when legal and religious discussions disallowed Jewish converts from becoming fully Christian. The talk will also consider the politics of the crusades, theories regarding blackface, and  the stakes of racial biopolitics during a time when England had crusader colonies.

Erica Fudge, University of Strathclyde
Leaning Up Against the Flank of a Cow
This talk will look at the act of milking - the everyday physical contact women had with cows, and cows had with women - in order to think about how attending to this task today (in the library not the yard) might impact our understanding of the nature and meaning of ‘family’ in early modern England.

Ellen MacKay, University of Chicago
How To Know Things Without Words:
The Tempest's Preenactments, Jamestown's Reenactments, and the Scholarly State of Embodiment-Based Inquiry
This paper takes up two performative iterations of the Sea Venture's wreck and recovery--one in Shakespeare's The Tempest, and the other in the heritage cultural exhibits at Jamestown, Virginia, to consider the ethical force of acting things out in vernacular history and academic historiography. By focusing on an episode that confutes the difference between performing the past and rehearsing for tomorrow, my aim is to put to question the virtue that accrues to the former and the mistrust to the latter. At the same time, I wish to keep in the repertoire of teaching and learning a rich and deliberate practice of going through history's motions.

Jesús Rodríguez Velasco, Columbia University
The Soul as a Time Machine
In one lecture delivered in 1910, Henri Bergson suggested that the soul is what allows the body to live time, to travel across the past and across the future. Taking the lead from this idea, I will focus on texts and debates on cognitive processes, law, and temporality taking place in the Mediterranean during the central Middle Ages, in order to better understand the soul as a time machine.

Joe Moshenska, University of Cambridge
Touching the Past, Playing the Past
This paper will begin with a set of objects, installed on the staircase of an English stately home; a series of medieval wooden sculptures of saints measuring around eighteen inches in height, their simple appearance conceals a tangled historical trajectory.  After being removed from the nearby parish church at the Reformation, these objects were given to children as dolls before being reclaimed and ensconced in their current location.  This progression – from sacred thing to plaything to art thing – is by no means unique; numerous once-holy objects were given to children in this fashion.  In this paper I argue that the object of iconoclastic child’s play opens up new perspectives from which to understand our relationship with the tangible traces and texts of the medieval and early modern past.  These multifunctional and polychronic objects suggest that the way that an object has been handled – from reverent to desecratory to playful touch – multiply its forms of significance in the present.  I will ask whether we might seek to touch the past differently if we considered various surviving objects and texts in terms of their ‘toy potential.’


W.E.B. Du Bois writes that every African-American lives a “double life…as a Negro and as an American, as swept on by the current of the nineteenth while yet struggling in the eddies of the fifteenth century.” Taking into account the Victorian popular medieval revival’s effects on nineteenth- and twentieth-century literatures, this talk examines the use of medievalism by Harlem Renaissance writers such as Du Bois, Jessie Redmon Fauset, and Claude McKay in order to cross temporal, disciplinary, and racial boundaries. This talk will examine how the writers of this modern literary movement, with their contemporary political aims of racial justice, touched the medieval past in order that they might engender the future they desired. 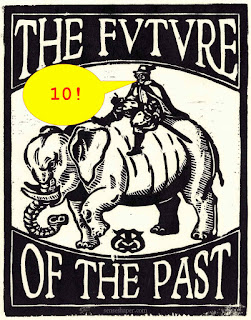 Posted by Jeffrey Cohen at Sunday, December 03, 2017 No comments: Links to this post